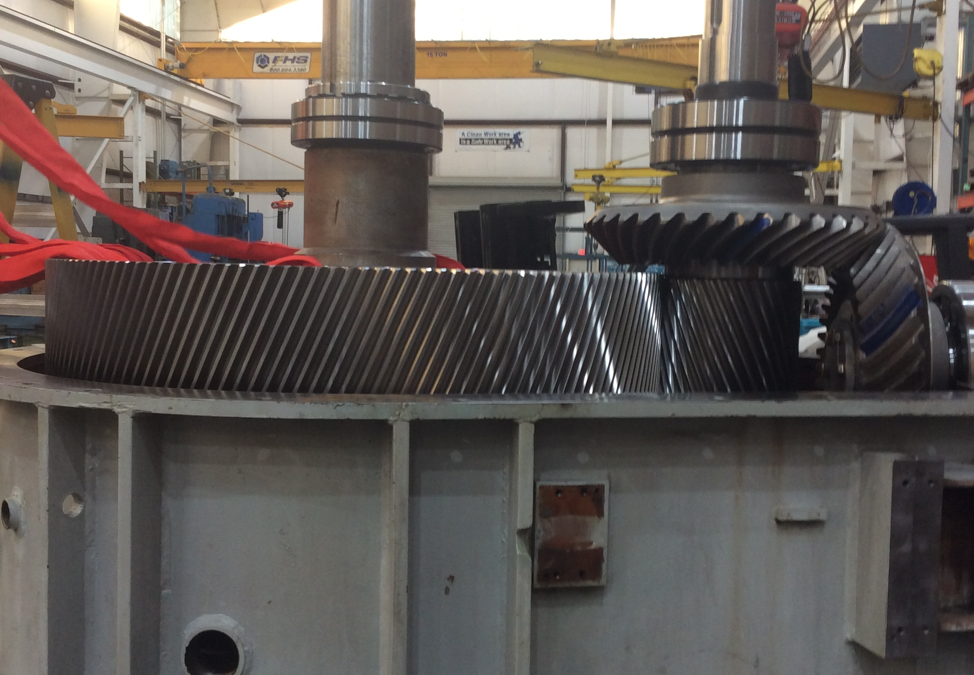 In 2019, a high-water event at one of the world’s largest water pumping plants, the W. G. Huxtable Pumping Station, in southeastern Arkansas, damaged two 50-year- old gearboxes that led to an operation failure that threatened the livelihoods and safety of rural residents in a less-than-affluent county. 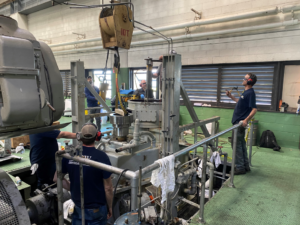 The Huxtable Pumping Station, operated by the Memphis District of the U.S. Army Corps of Engineers (USACE), serves to prevent flooding in Lee County, Arkansas, a mostly rural county in the Mississippi Delta that includes 1.2 million acres of farmland. According to the last U.S. census, the county had a population of 10,424 with a median household income of $23,716 and 42.6 percent of the population living below the poverty line.

Bordered on the east by the Mississippi River, Lee County also has two smaller navigable rivers, one of which is the St. Francis. The Huxtable Pumping Station was built in 1977 to prevent flooding in the St. Francis River bottomland.

Given our successful track record with other USACE projects, we bid on the job and were awarded the contract in March 2020, just as the country was beginning to shut down because of COVID-19. The potential impact of the failed pumps was so huge that despite the entire country shutting down, we began planning the repair on March 20. 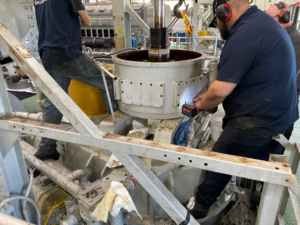 “I flew out there for the pre-bid site visit just as the first COVID cases were starting,” said AGW Vice-President of Sales Craig Massa. “Two 50-year-old gearboxes, #9 and #10, had failed.”

Management at the plant had analyzed the failed pumps and estimated the time needed to get them up and running again to be a year, but like many large projects, the problems turned out to be more complicated than initially thought.

“The original job specs required the contractor to rebuild the two failed gearboxes on site,” said Massa. “They knew they had a broken shaft and other wear, but we knew the repairs would be complicated and wanted to bring them back to our shop [in Dawsonville] because of our infrastructure.” 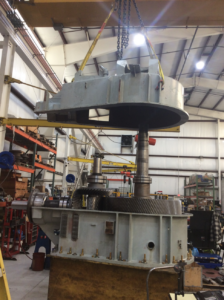 Our field service team went to Huxtable in early May, removed the gearboxes and transported them back to Dawsonville. Despite the pandemic, following CDC protocols, we kept working.

And that’s when the real work began. When we got the gearboxes back to our shop and opened them up, we discovered the repairs would be more involved than expected.

And though the gearboxes were identical, the repairs would be different for each one, with a focus on the gears themselves.

For the #9, we made all new gears, plus a spare set. In addition to the original specs, we found that the thrust bearing and backstop needed to be refurbished and the lubrication pumps and coupling disc packs needed to be replaced.

For the #10, we were able to use gears provided by Huxtable. Since the intermediate pinion shaft had sheared and greatly damaged the gears, to prevent future failures, we made a modification on the gears on that shaft at the point where it broke to reduce stress concentration. We also refurbished the thrust bearings and the backstops to prevent the gearbox from running in both directions. 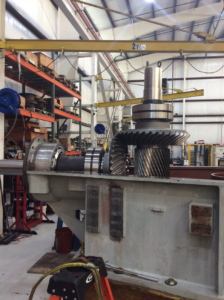 At the request of plant management, to reduce future wear and tear, we also hired and supervised a subcontractor to perform vibration tests on a total of ten gearboxes and overhauled where necessary.

Our field service team and our extensive field service rig, under the leadership of Engineer Taylor Simms, made two 500-mile trips to the site for removal and installation of the 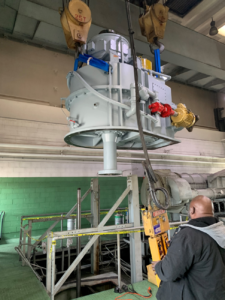 gearboxes. Altogether, 20 of our people worked on the project, with most of the actual repair work done at our shop in Dawsonville.

“We’re proud to have been selected for a project of this scope and significance,” said AGW President Jack Conway. “It’s why we hire the best people and stay ready to serve

Despite the unexpected complexity of the repairs, we’re proud to say we finished the job two months ahead of schedule, on Jan. 15, 2021.